The South African government closes the chokka fishery annually between 16 October and 30 November. During November, when spawning is at its peak and there is no interference with the commercial fishery, Blue Wilderness runs its Chokka Run diving expeditions.

Squid (aka Chokka in South Africa), spawn in the inshore areas of the Eastern Cape throughout the year, with this activity peaking in November and December. November presents an incredible window of opportunity for adventure divers, as this is a closed season for commercial chokka fishing, and the massive beds of chokka eggs and spawning chokka remain undisturbed.

The chokka run occurs during the peak mating, spawning and egg laying season for South Africa’s chokka. At this time, divers can descend onto massive beads of choke eggs and observe the dynamic life and interactions that occur above the vast beds of choke eggs.

Predators on the Chokka Run

From above, the orange egg clusters stand out against the white sand. Rays can be seen everywhere, swooping over the egg beds, scattering the squid. On the outskirts, the smooth hound sharks patrol. Up in the warmer water, juvenile dusky sharks are often seen. During a single dive it is not uncommon to see five different ray species.

The seals rely on the speed, agility and intelligence of a marine mammal. While rays or sharks swimming over the egg beds, cause minimal disturbance to the egg laying, a seal swooping down on the beds will instantly clear the area of squid for at least a minute. Once a seal captures a squid, it returns to the surface where it smashes the squid on the water surface to break it up.

Cannibalism is fairly common amongst squid. Sometimes a squid can be seen with another squid in its mouth. Sometimes two or more squid, tentacles locked, engage in a tug-of-war over a dead squid.

The biggest challenge of the South African Chokka Run, is the underwater visibility that can remain poor, especially near the seabed, for  number of days. The squid activity is also affected by underwater visibility, water temperature and the time of the day (sunlight penetration).

The optimum water temperature for spawning is between 16 and 18 degrees at the bottom. Whilst this is an incredible experience, divers need to understand the risks and challenges that can be expected on South Africa’s Chokka Run.

How do we locate the chokka run beds?

Traditionally, getting divers on chokka beds was a bit of a ‘hit and miss‘ affair. Today, however, Blue Wilderness utilize a underwater drop cam fitted with LED lights, temperature sensors and a host of other environmental sensors. Using this system, we can locate the chokka egg beds, monitor the diving conditions and view predator and squid activity on the beds. Ensuring that when we hit the water we will be dropping into the midst of the chokka run in its full glory!

*Alternative days activities if diving not possible due to weather constraints

Where can I learn more about the Chokka?

We have built a great online resource of all the latest blogs and article about South Africa’s chokka run and the commercial chokka fishing industry. To view these articles, please click here.

What are the chokka run expedition dates

We run our chokka run expedition  between 16 October and 30 November during the peak spawning season. The dates of the expeditions are determined by the annual closed season for commercial chokka fishing.

How long are the expeditions?

We do not set the minimum amount of time that guests need to join us on the chokka run  expeditions. So if you only want to join for a single day, then that is fine. However, due to the nature of the expedition (considerable variation in chokka activity and diving conditions), we recommend that guests join us for a minimum of three diving days.

Do I need a SCUBA qualification?

Yes, the mean depth of the SCUBA diving on the chokka run is between 20 and 25m. Thus you will need a minimum of a advanced open-water SCUBA certification. If you are not yet qualified for deep diving (over 18m), then you can arrive early and gain a PADI advanced open-water diver qualification from our instructors.

How tough is the chokka run?

The Chokka run is not tough in terms of the physical demands on the body. However, the water conditions are tough for divers who enjoy tropical clear blue water. Water visibility is low (3 – 7m) and temperatures drop to between 12 and 16′ C at the bottom where the chokka egg beds are located. As we wait on the boat for the spawning and feeding action to begin (using our drop camera system), we can remain at sea for a number of hours each day.

How tough is the chokka run?

The Chokka run is not tough in terms of the physical demands on the body. However, the water conditions are tough for divers who enjoy tropical clear blue water. Water visibility is low (3 – 7m) and temperatures drop to between 12 and 16′ C at the bottom where the chokka egg beds are located. As we wait on the boat for the spawning and feeding action to begin (using our drop camera system), we can remain at sea for a number of hours each day.

tough, and anybody joining us on an expedition should have a relatively good level of fitness and be used to spending time on the ocean. Spending 8 hours a day on a small boat is challenging for even experienced ‘seadogs’.

Where do I stay during the chokka run?

Blue Wilderness locates it self in the seaside town of Saint Francis Bay. We set up a temporary diving and accommodation centre in the town where our crew, boats, SCUBA kit and guests stay.

Which airport should I fly into?

International guests, or local guests flying in, should arrive at Port Elisabeth Airport. From here the Blue Wilderness team will meet you and transfer you to Saint Francis Bay.

What if I get seasick?

Due to the proximity of the dive sites to the harbor, it is possible to return you to the mainland should you feel seasick and not continue with a days expedition. Cancelling your diving due to sea sickness will not enable us to offer any refund or discount.

What happens in poor weather conditions?

If weather is considered too dangerous to safely head to sea and dive, the days diving will be cancelled at the discretion of Blue Wilderness. In the case of cancelling a days diving, guests can join us on a land based safari or alternatively receive a diving refund of R1000pp for that day. If we decide to head to sea, and conditions are too poor to dive (as determined by Blue Wilderness, guests will also receive a R1000pp refund for that day.

How does the catering work?

Blue Wilderness has partnered with a local cook who will prepare awesome meals on a daily basis. If you have any special eating requirements, then let us know in advance so that we can cater for this.

Can I bring my DSLR / Video camera and strobes / lights?

This expedition is suitable for professional photographers and videographers to collect content on. Thus there is no limitation on the amount of types of cameras that you can bring. 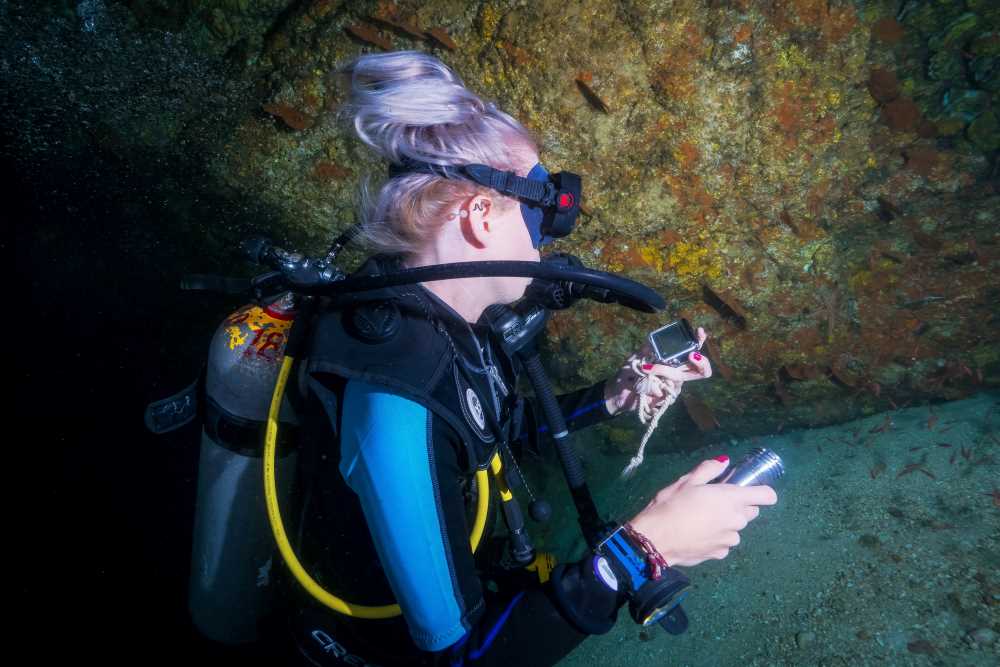 Watch: Important tips for beginner SCUBA divers
Embarking on the journey to become a professional SCUBA diver can be daunting. This is especially true if you’ve only started out as a diver! Being a SCUBA diver is a commitment. You need to dive regularly, keep to certain health and fitness requirements, and get to know the art of handling yourself underwater. Under [...]
Read more 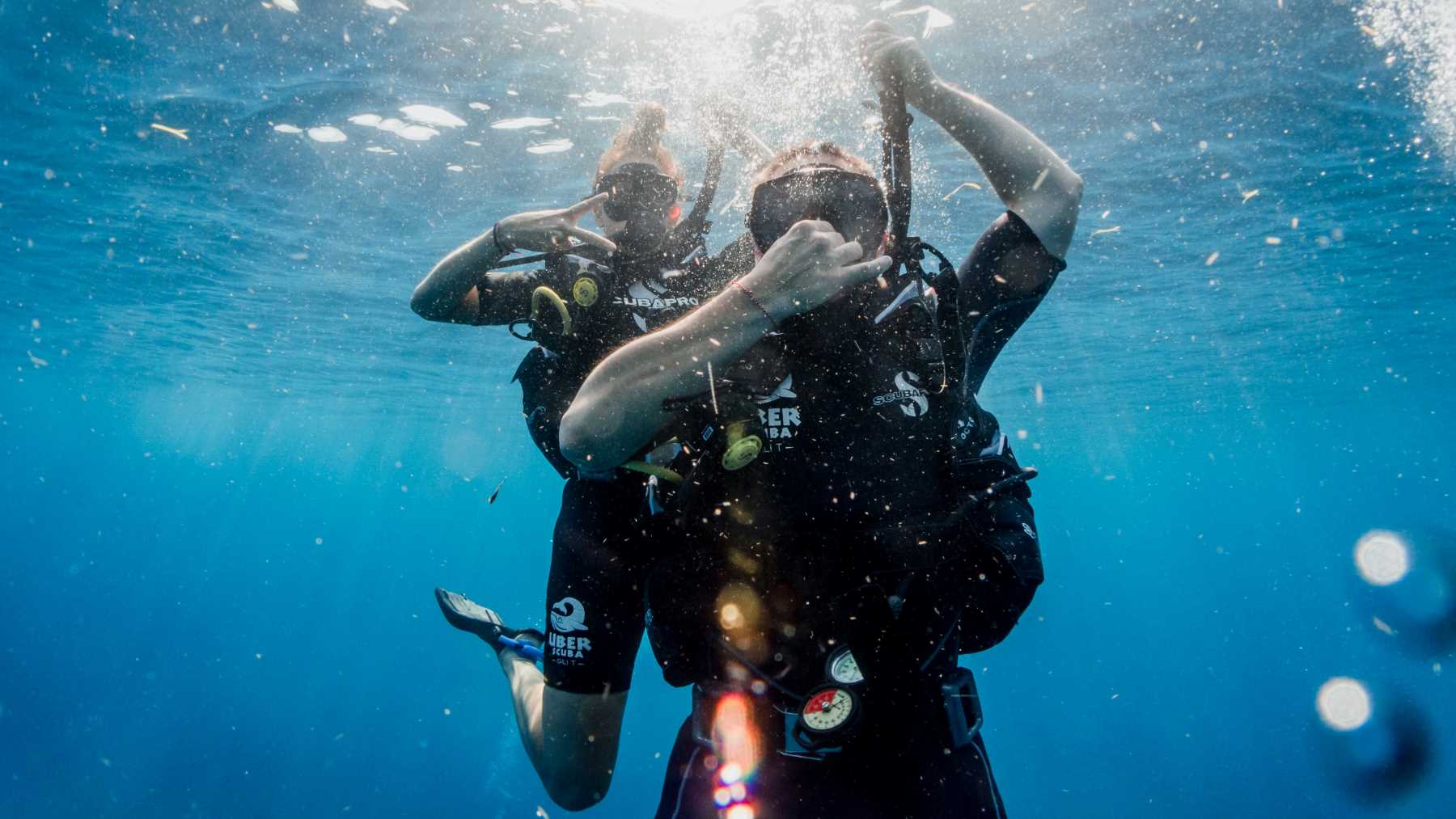 The pros and cons of becoming a SCUBA Divemaster

This guide will help you decide if you want to commit to the exciting, but challenging, life of a SCUBA Divemaster. 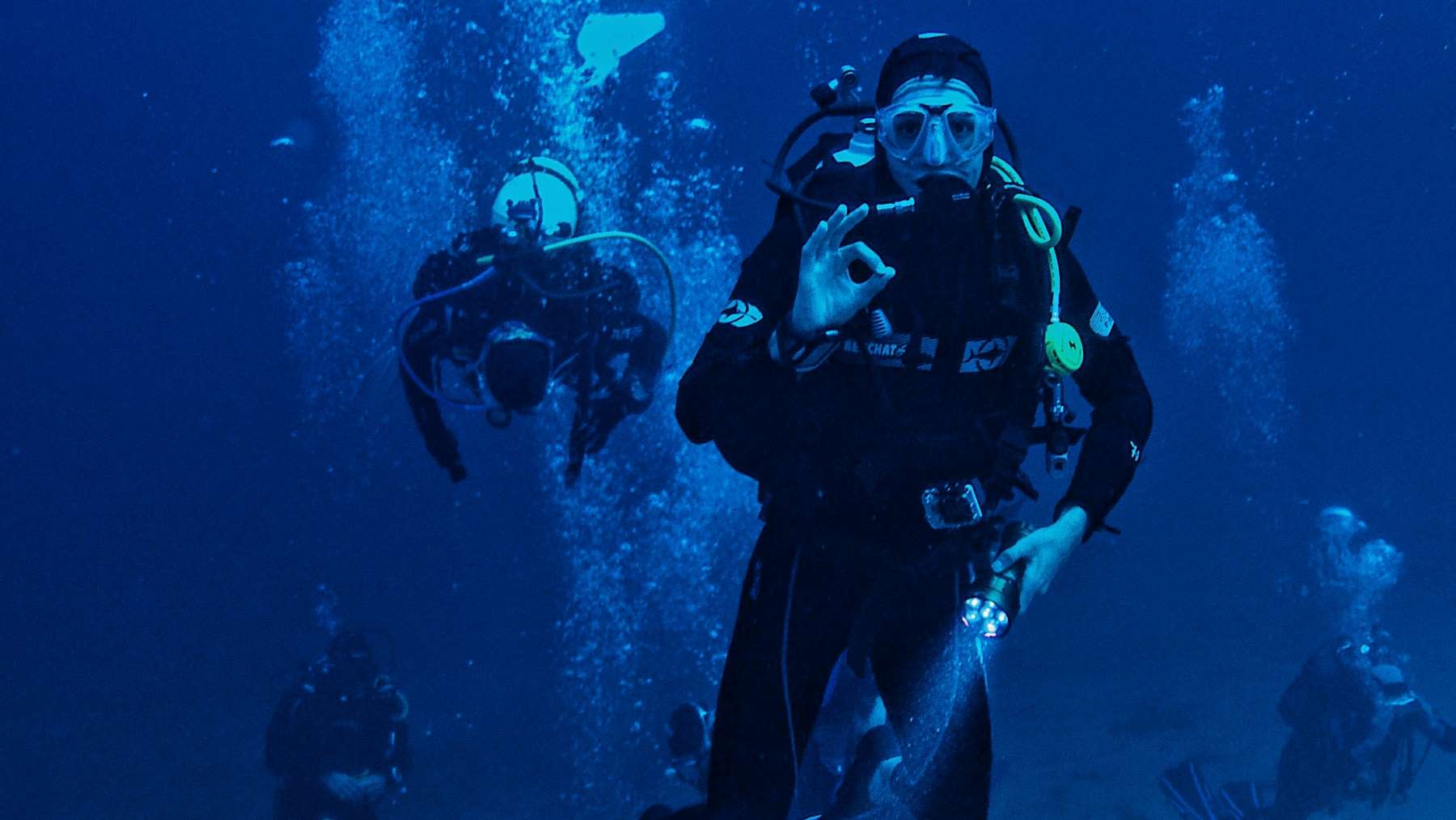 Skills you need to become a professional SCUBA dive instructor

It takes much more than just a scuba qualification to become a professional scuba diver. Take a look at these essential skills you need to become a dive instructor.

Katt Andryskova is an ever-curious adventurer and environmentalist. Learn from Katt what it takes to be a top class SCUBA instructor.

Szilvia Gogh works as an underwater stuntwoman in Hollywood, California. She is a highly experienced scuba diver who has worked on many films and TV shows. Hear what she has to say about the exciting work she performs.

Thank you for your requet for support. We are always here to assist. Submit the below form and we shall immediatly revert. Alternatively you can phone / whatsapp us directly on +27717058518.